Hiller is no 'Fool' to take on Beatle 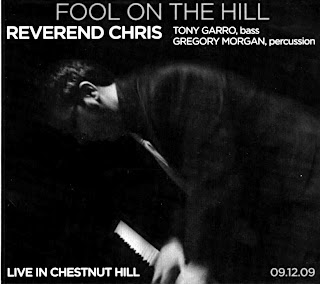 Last summer, as nearly everyone was lining up to buy the remastered reissues of the Beatles back catalogue, local piano fixture, Reverend Chris Marsceill was conceiving a one-time performance of Beatles classics at Tavern on the Hill that he would release as a live album.

Marsceill, who may be the busiest musician in Chestnut Hill — he plays solo and in several different combos — is a Chestnut Hill area native and Springfield Township High School grad who moved back after his New Orleans home was obliterated in Hurricane Katrina. The 29-year-old has been playing piano since he was six.

But, Reverend Chris (his stage name; he is not an ordained minister) has stuck primarily with jazz. He studied jazz performance at Loyola University in New Orleans, so the Beatles were not necessarily an obvious fit for him.

“It was interesting to me as a guy with a jazz background,” Marsceill said in a recent interview. “I don’t play many Beatles songs. Some of them I’d never even heard, like 'Rain,' for example.”

To produce the live album, Chris thought of doing a show in conjunction with the release. He had a plan to perform three sets of songs with an upright bass player and a percussionist and to have local recording engineer Jason Fifield, who often plays bass with Chris, record the performance.

Once he had the show booked, Marsceill prepared for it quickly. “I worked out the arrangements on my own,” he said. “The bassist and I got together four times. The percussionist? We never got together. We had to laugh. He said , ‘I feel more comfortable going in not knowing anything.’”

The document of that Sept. 12 performance, “Fool on the Hill, “ is now available, both at Chestnut Hill’s Hideaway Music and on iTunes. The album cover is a really nice-looking classic Blue Note-style cover featuring a green-tinted black and white photo of Marsceill at the keyboard. It’s a 15-song collection of Beatles’ classics, from “Magical Mystery Tour” and “Lady Madonna” to “Come Together” and “Here Comes the Sun.”

Throughout the performance, Marsceill’s energy is high. The playing on the CD by all is really quite good, particularly for a live album. Marsceill’s arrangements are lively and inventive. His vocals are at first a bit shaky, but they really warm up by the third song, “Lady Madonna.”

“[The show] was fun,” he said. “It was different; you know the place was packed with people.”

That crowd can be heard a little. Fifield’s recording is clean with minimal background bleed into the microphones he used — particularly when they cheer as Marsceill ramps up a favorite like “Something” or “Come Together.” A little more room ambience might have been nice to hear, but the high energy of the musicians involved permeates the album. For a fun local document and some nice recordings of Beatles standards, “Fool on the Hill” is well worth a spin.

“Fool on the Hill” can be physically purchased at Hideaway Music, 8612 Germantown Ave.

Posted by Pete Mazzaccaro at 7:56 AM